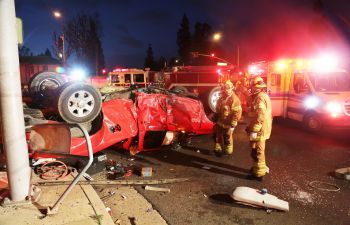 On Friday afternoon, October 22, 2021, a two-vehicle accident near the intersection of Birmingham Highway and Hunter Loop Road left three injured. Spokeswoman Capt. Saba Coleman of the Montgomery Police Department reported that both drivers involved in the crash suffered minor injuries, but a passenger was sent to a nearby hospital in critical condition.

While it is still unclear exactly what happened and the cause is still under investigation, there was a white sedan with extensive damage to the front end, and a dark-colored SUV flipped upside down in the median. It is assumed the critically injured passenger was riding in the SUV.

Any time a vehicle turns onto its side or roof, it is labeled a rollover accident. The risk of injuries to those inside the vehicle is much higher in a rollover, and those injuries are much more likely to be life-threatening. High-profile vehicles such as trucks and SUVs are typically associated most often with rollovers. Still, any vehicle has the potential to roll over in an accident, depending on the many factors involved.

In 2019 alone, over 6,300 fatalities in the U.S. were due to rollover crashes. This data, published by the National Highway Traffic Safety Administration, or NHTSA, shows that rollovers are continually the most dangerous vehicle accidents in the country. In a more recent report, the NHTSA has found that although Americans are driving less during the COVID-19 pandemic, the number of fatalities on U.S. roadways is increasing alarmingly. The preliminary survey results show an increase in deaths for those in passenger vehicles by as much as 5% over 2019.

How a Rollover Happens

There are many factors involved in any vehicle accident that can make them hard to predict at the time of the crash. It typically takes a thorough investigation to fully understand how the accident happened and who was at fault. However, we see several causes of rollover accidents that are more common than others.

Sometimes it is apparent who is responsible for a rollover accident, and sometimes it is not as easy to determine. Because an investigation may be underway, it is essential not to provide a formal statement to an insurance company before there is a complete understanding of what took place. Once the investigation is completed, there still may be some gray area, and an experienced personal injury attorney can help. Depending on the situation, multiple drivers, the agencies that maintain the roads, the vehicle manufacturer and more parties can be involved.

Because rollover accidents are more likely to cause injuries or even death, you should contact a personal injury lawyer as soon as possible. Call Dwayne L. Brown if you have been involved in a rollover accident. Having an experienced personal injury team on your side can make a big difference in your experience following an injury. Get started with a free consultation by calling our Atlanta or Montgomery office today.